Free Delivery on orders over €50 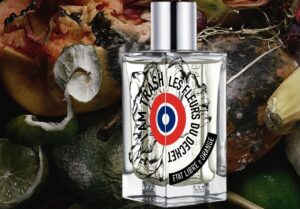 THE MOST WANTED SCENT MADE FROM THE UNWANTED

By virtue of my mother, I am the son of a forgotten coast, far away in New Caledonia. At the mouth of the Ngoye live the Borindi, who have known since the twilight of the gods the great principle of harmony with Mother Nature:  to take from her no more than is necessary while preserving for tomorrow. They understand the future of mankind, and in the shade of the niaouli tree and jacarandas in bloom, they guide our first steps into this new direction for Etat Libre d’Orange.

In the early years of this new millennium, when my children were young and I was a hopeful thirty-year-old, I took them to see an animated film called Titan AE. I learned by heart the introduction, which went something like this:

“Once in a while, man unlocks a secret so profound that it can change the universe: fire, electricity, atom splitting.  At the dawn of the 21st century, we invented the Titan program . . . ”

There is a jumble of romantic and titanic science fiction poetry that emerges from the slow, sure, and inevitable rocking of wastewaters in the industrial cycle. We want to make this perfume a messenger, in service not only to the survival of the species which results from seduction, but above all in service to the planet where our own miasmas must reflect beauty.

We believe that a new post-religious “jihad” is approaching, coming from an often disillusioned and polluting West, and echoing a new animistic era. Those who have committed crimes against the environment are repenting, and democracies are acknowledging nature as the sacred focal point, meant to be shared. The beliefs of the primitive and ancient tribes are back, and demand our full allegiance. This perfume will carry a universal message:  that which is dirty must reflect the beautiful,

Carrying away both rudder and anchor.” (Arthur Rimbaud, The Drunken Boat.)

Les Fleurs du Déchet represents a passage to the adulthood of Sécrétions Magnifiques. It is a counter-revolution for Etat Libre d’Orange, still noisy and disruptive, but ultimately functional.

Givaudan, Ogilvy and Etat Libre d’Orange have created a three-fold company in the service of Mother Nature, to offer her a bouquet of forgiveness and let everyone know – loudly and quickly – that soon it will be too late.

Dear world:  Do not throw anything away because at the bottom of our trash lies the fermented distillation of great love. The garbage trucks hold flowers that can still bleed, the peels and rinds that can still give. The noxious exhalations have honey notes that can merge with the earth. And there are so many floating concretions, the trash that is thrown into the sea, and the natural waste, the ambergris, mystical symbols, the attitudes of primitive tribes – these must now be reprocessed.

To paraphrase and distort Alan Paton: Cry, my beloved planet, for the unborn child; let him not love the earth too deeply, for it is slipping away.

So before it’s too late, let us (s)pray to the god of waste, our dear lord of leftovers.

End of sermon. This is a messianic fragrance (in natural spray, of course.)